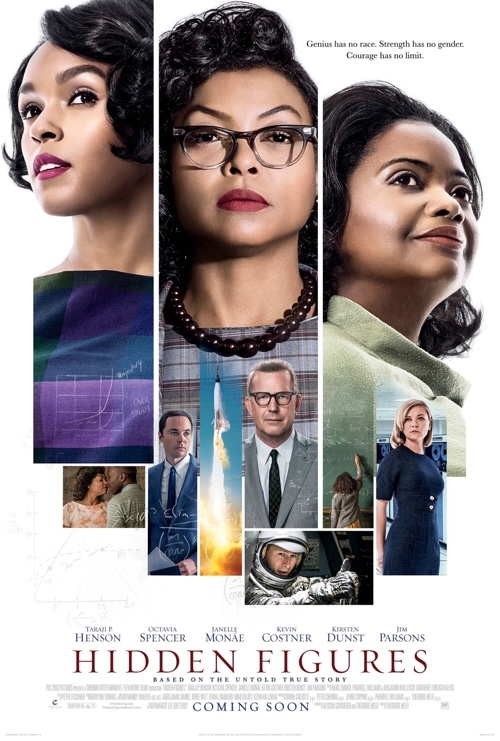 « This film is about three black female mathematicians who help complete a NASA mission. These inspiring women fought for their dreams in a world where segregation is a part of everyday life. A standout scene in the film is when Mr Harrison decided to remove the signs above the toilets stating that the toilets are for coloured people only, making the facilities usable by everyone.
It’s inspirational, it’s a lesson for all people.
It’s an emotional film which mixes unmatchable talent with the suspense of the space race, a national event which unravels itself in a new way, the uplifting story of how these 3 women battled for their rights, to achieve what they thought was impossible ».

« The title of the film is “Hidden Figures”. It’s a biopic because the film is based on a true story. The three women are Katherine Johnson, Dorothy Vaughan and Mary Jackson and they work for NASA and they loved maths and science. Then, in the 1960s in the USA, the women were discouraged from studying maths and science, particularly black people and the black women. In Virginia, racial segregation was usual. Indeed, black people couldn’t go to the same schools, live in the same parts of town, or use the same public services as white citizens. At the beginning of the film, the three women were human computers: their job consisted in doing all the complicated maths calculations. After, they were part of an elite working team for example Katherine checked all the calculations of the rocket and Mary became an aeronautical engineer. Throughout the film, these three women fight against racism and sexism of which they are victims. With time, they managed to gain more and more rights. For example, Mary succeeded in attending a university reserved for white citizens to become an engineer. Dorothy became senior and Katherine continued to work with the better mathematicians at NASA ».